Stonham Barns has hosted a number of UK FootGolf Ranking Suffolk Tournaments and the Suffolk Footgolf Open. Here are the results from all the events with the latest at the top:

A fantastic performance from Darren Wheat helped him capture the 2018 Suffolk Open Footgolf Championship. With a score of 49 (9 under par), the second best score ever around the Stonham Barns course, he won by none shots. In =2nd place were Mark Winter, Richard Fenn and Callum Harris. This was the fourth playing of this tournament and this year there was a field of over 50 players from around the region. There were prizes for mens, ladies and juniors and the ladies prize was won by Michelle Scott with an score of 70 and the junior prize was won by Cole Wade again with a score of 70.

Steve Crane from Central Florida Footgolf won the Stonham Barns October Footgolf Tournament with a score of 56 on a tough breezy day. Steve, who is on a visit to the UK, saw the event advertised and decided to have a game. He won by one shot from Tyson Anderson, Liam Quinn and Ben Tallowin. The Junior prizes was won by Fin Anderson with a 66.

Well done to Marcus Pfetzing on winning the July Footgolf Tournament with an excellent score of 51, 7 under par. In 2nd place was Ben Bedford with a score of 52. 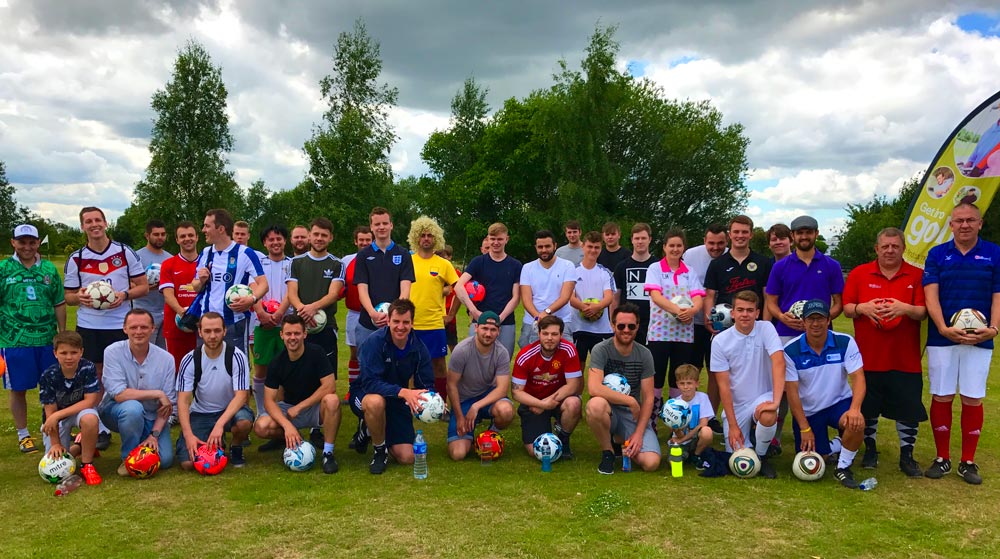 Footgolfer Owen Peck, who last year became UK FootGolf National Junior Tour Champion at age 16, scored a marvellous 8 under par score of 50 to take Suffolk Open title at Stonham Barns by one shot from Pele Heydon. Owen was one behind Pele, the pre-tournament favourite, after 9 holes but a birdie on the 10th and a bogey by Pele gave 17-year-old the lead which he never relinquished. Ian Plumb was in 3rd place with a score of 52 with Neil Donohoe and Ben Benford tied 4th two shots further back.  The Under 18 Trophy was won by Tom Scott with a very good score of 61 and the Under 15 Trophy was won by Charlie Tranter a great score of 60. The Ladies title was won by Eve Humphries. See Full report & Photos

Well done to Darren Wheat on winning the Stonham Barns May Tournament with a one under par 56 on a tricky breezy day. In 2nd place was Wayne Goodey with a 59 and the junior prizes were won by Henry Johannessen (U18) and Alex French (U13).

Pele Heydon wins Stonham Footgolf event again. His score of 51 (7 under par) was just good enough for a one shot win over Darren Wheat with Markus Pfetzing in 3rd another shot further back. David Harper finished in 4th place on 57. Well done to Luca Ferretti who won the junior trophy with a score of 68.

Footgolfer Pele Heydon dominated the first footgolf tournament of the year at Stonham Barns Footgolf. With 7 birdies and an eagle of the 2,640 course he achieved a nine under par score of 49. In 2nd place was Daren Wheat with a score of 52 (-6 under par) and one shot further back was Ian Plumb who scored a 53 (-5 under par). The junior prize was won by 13 year old Bailey Rosier who scored an impressive 58 (level par) with Charlie Tranter in second with a score of 61 (+3 over par). Charlie’s score was helped by an amazing hole in one on his 10th hole.

David Harper Wins 1st Stonham FootGolf Players Championship
David Harper from Essex claimed the 2016 Stonham FootGolf Players Championship in style with a 51, 7 under par. After 9 holes Pele Hayden was leading by two shots but a 5 under par back nine secured the title for David.
There was a tie for 2nd place between Darren Wheat and Pele Hayden with scores of 53 (5 under par). However as Darren has the better back nine, 6 under par 23, he took 2nd place and Pele was 3rd.​

The results for the Stonham FootGolf Tournament  - Sunday 17th April 2016.