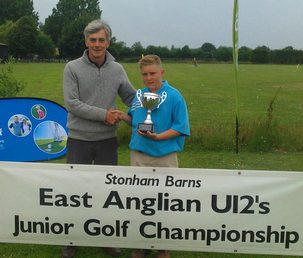 Tony Dobson Presenting Trophy to Ryan Turnbull
Well done to Ryan Turnbull, a 12 year old member of Cretingham Golf Club, on winning the 14th East Anglian Under 12 Junior Championship at Stonham Barns. This was Ryan's 2nd win in three years, having won in a play off in 2012. His score was a 65 was very good in the breezy conditions and was good enough to win by a fantastic margin of 16 shots. After a first 9 nine of 33 he birdied the 10th hole on his way to a back nine of 32.

The Under 10 Age Category was won by Rio Everitt, a 10 year member of Stowmarket Golf Club. Rio, who was one of three girls playing, has been a regular competitor at Stonham over the years.

The Under 8 Age category was won by Henry Meadows, an 8 year old from Fynn Valley Golf Club, who scored an 80, which was in addition the second best score on the day.

There were two entries in the Under 6 Age Category which was won by Finlay Brock, a 5 year old member of Ufford Park Golf Club with 6 year old Ryan Daley from Stonham Barns playing his first junior event in 2nd place.

This junior event in its 15th year has always attracted juniors from all over the region and even been featured on a Channel 4 TV programme. This year juniors from 13 different Suffolk Golf Clubs were playing and it was great to see a regular supporter of these events over the years come away with the Trophy for a second time.

The junior events at Stonham Barns are an ideal introduction to competitive golf for many of the youngsters as its played in a relaxed friendly environment and its always great to see the juniors enjoying their golf even when its not been their best day.

The next junior event at Stonham Barns will be the UK Kids Qualifier on Sunday 27th July. For more details see the website. www.stonhambarnsgolf.co.uk/junior-tournaments.html or call on 01449 711545. 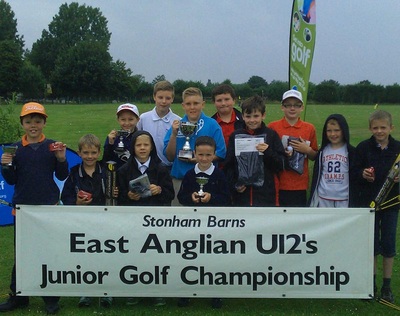 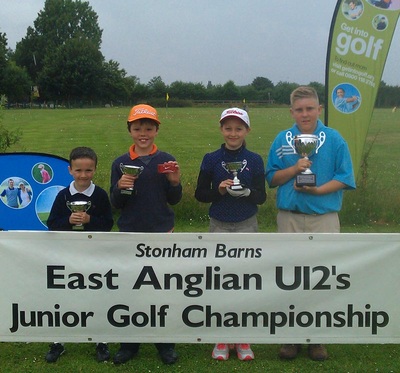