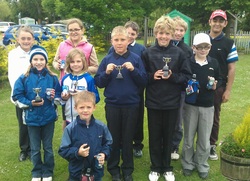 Stonham Flag Tournament Players
Well done to Ben Moyes, a 13 year old member of Stowmarket Golf Club, on winning his second event of the year at Stonham Barns. The Flag Tournament is where each player has 36 shots and they see how far round they can get and then after their 36th shot they put a flag in the ground. Ben managed to get to the 10th Green. In 2nd place was George Mannell, a 14 year old junior at Stonham Barns, who was playing only his second competitive round did really well to get to the 9th fairway. In third place was Amrit Hayer, a 13 year old who travelled down from Birmingham to play, who also reached the 9th fairway.

Well done to all the players who braved the cold conditions and the strong breeze which was not ideal for a June day. Although the short 9 hole course was in good condition the conditions were firm and tricky and the rough was tough ut the players coped really well in every age group.

There are eight junior events every year at Stonham Barns on their short 9 hole golf course. Usually they are held on the last Sunday of each month from April to November. The next event is the big one, the East Anglian Under 12 Junior Golf Championship which will now be held on the 14th July to avoid clashes with other events. This event is played over 18 holes and entries are required. Players can either enter on line at East Anglian Under 12 Entry Form or call 01449 711545